The writer’s journey can be quite the adventure. You never know what is around the next bend in the road, or behind that rock, or just how far it is to the next milestone.

If you’ve accomplished the first steps, writing, finishing and editing your manuscript, then hold onto your knickers, the next step’s a doozy. Finding it a publishing home.

With my first novel, I was so proud of finishing it that I couldn’t wait to find an agent or publisher. I started sending out queries (Writer’s Market is the best resource for that information. It’s available online and in print.) Each agent or publishing house has own set of submission requirements that must be followed to the letter or your request will immediately be filed in the trash bin.

Whatever their guidelines are, follow them. Edit your submission BEFORE you send it. If there are typos, grammatical errors, or some other oops, it will not be read. It will be trashed. Hundreds of queries and submissions are received daily and weekly by agents and publishers alike. If you can’t do what they ask in the proper form, they don’t want you or your work. There is too much competition out (millions of manuscripts).

I tried the biggest publishers and agents first and didn’t get very far. Setting my sites on smaller houses got my submission read. My rejection file was filled with notes and letters, some of which were copies and some had “ink.” INK IS GOOD. It means they liked it enough to comment. A first step, my friends.

Many times it takes months before you receive a response to a snail mail query and submission. With email and electronic submissions, that time has been shortened. BUT, it’s easier to say no thank you in an email. Quicker, too. Don’t give them an excuse to reject you. Give them what they ask for and you’ve got a better chance of being read.

When my first novel received comments like, “this is a good concept, flesh it out” or “submit again after you’ve edited” (even though I’d edited it several times), I realized my manuscript wasn’t quite ready yet. My enthusiasm for having finished the manuscript did not make up for the need for additional editing and rewriting. I sent out 75 queries/submissions and although I did have some requests for more material, those magic words “we’d like to publish/represent this novel” didn’t come. Rejections, however, did.

After an extensive rewrite, more editing from colleagues and beta readers, I felt Feisty Family Values was as good as I could make it. I sent out 25 more queries/submissions, this time to smaller publishers and agencies and within a few I had a contract for publication.

It was edited and vetted yet again by the publisher, then put on their calendar for eighteen months later. OMG. I was going to be a published author! From the time I began writing the story and the day it hit the shelves was ten years. A decade. I sure wish I’d started sooner.

A friend of mine asked me to blog on the writer’s journey. First off, if you aren’t a writer you don’t realize what it means. It’s one of those things you have to experience to understand fully, but I’ll try to explain the first steps.

Picture walking barefoot, up a rocky incline, with a splintery staff, torrential rain, wind gusts buffeting you every step of the way and the mountain keeps rising above you. That’s right, you feel like you’ll never reach the top. You hurt and you’re discouraged by the slippery path.

Okay. Now. Writing is much the same. You spend hours pouring your thoughts onto the page, wondering if you’ve painted a clear picture and who in the world will care to read it. You realize writing is harder than you every imagined and making what is in your mind make sense on the page is beyond challenging. Does the world I’ve created make any sense? Does anybody care?

This is a glimpse into 75 percent of the writer’s journey. HOWEVER…

You will learn along the way, how to avoid the sharp rocks on the path. Your feet with get tougher, your legs stronger, and you’ll wear the splinters off the staff that is you to stay upright. You’ll find others along the way, others just like you who have dreams and visions of a story they want to share.

You’ll help each other. While each of us is on our own individual path, we cross the paths of others. When we do we will commiserate, support, vent, and celebrate each other’s achievements.

When you’re totally focused on the story, you enter another world. A world you’ve created. You meet characters in that world that want to help you tell this story you’ve envisioned. The excitement will bolster you for the times when the words just won’t come. You’ll use every ounce of energy you possess to make your story come to life and when it does, you’ll feel accomplished.

You’ve birthed a bouncing baby story. You’ve labored and breathed through the pain, now it’s time to tidy it up for others to see. For the layman that means “edit.” Edit is a four-letter word. Edit is what reveals the jewels from the garbage, and we all write garbage from time to time. Edit will polish and comb the baby’s hair, put on it’s best duds and make people want to know the story.

So, to recap. Writing is a journey of discovery and pain, enlightenment and joy. Writing well is hard and will take dedication and total commitment to doing the best you can. I’ll talk more about what happens when you’ve finally written that story later, so stay tuned. 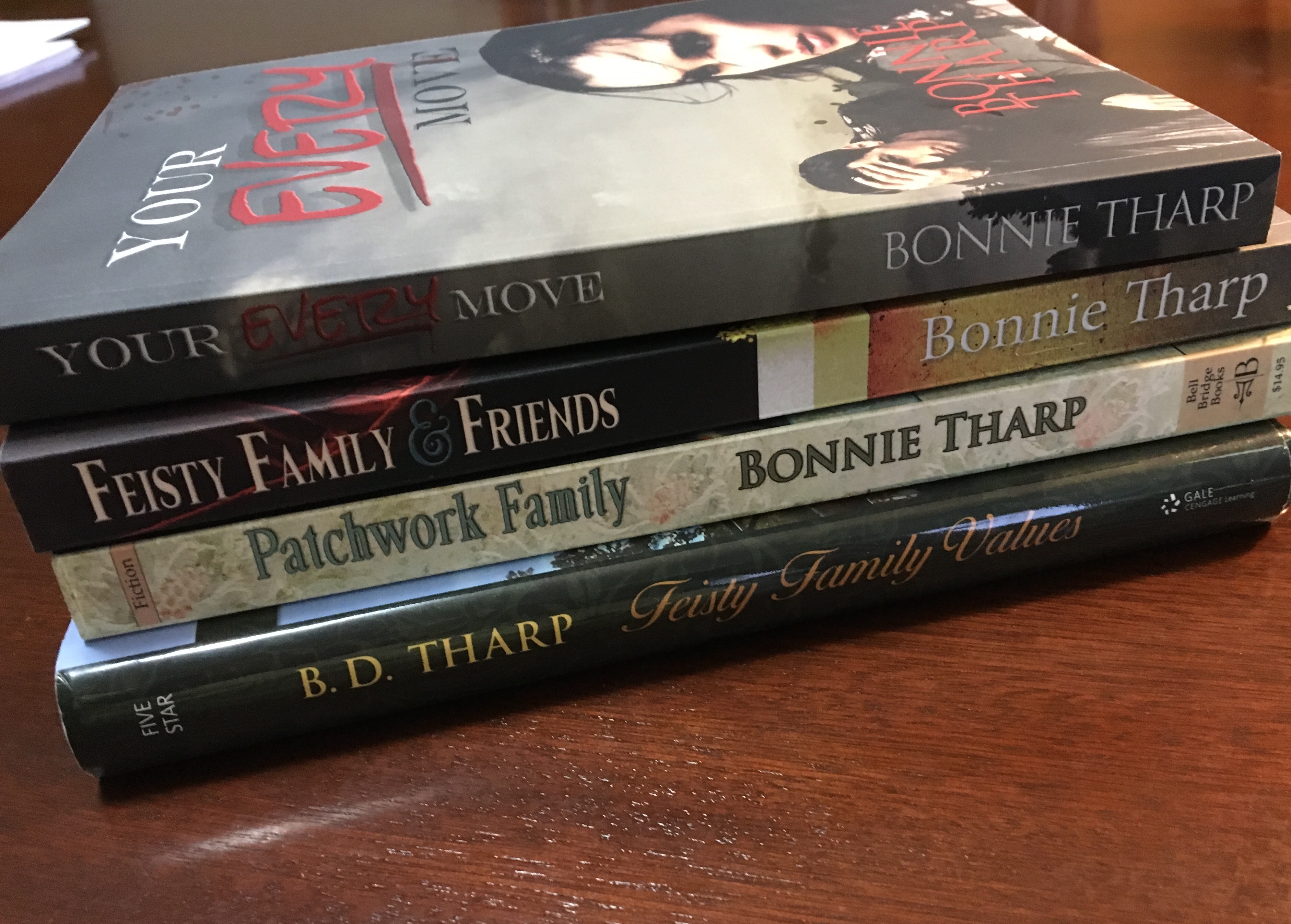 The Wichita Advanced Learning Library hosted a local author day, with discussion panel and author expo on August 24th. Three authors were chosen to discuss their experiences with publishing and answer questions from the audience, giving guidance to new writers as well as we experienced ones.

A couple of author buddies and I (H.B. Berlow & Kathy Prichett) joined most excellent reader, Penny Sanderback for lunch. We headed out to the Anchor but the line was out on the sidewalk, so we whipped in for a burger at Five Guys. Good stuff!

In the afternoon sixty local authors, you read that right – 60 – came together at the library conference area and renewed acquaintance, set up our works with signs and props, and the doors opened at 2:00 to admit a bunch of folks. For two hours the readers came and went, we sold some books, and talked about writing. It was great fun, exhausting and I hope to be involved next year. The library staff was attentive and very helpful. Thank you , Sara, and Sarah (not sure of the spelling, so I hope you’ll forgive me). Reverie Coffee kept us supplied with caffeine and sweets, too. I’m certain there are others whose names I didn’t hear. 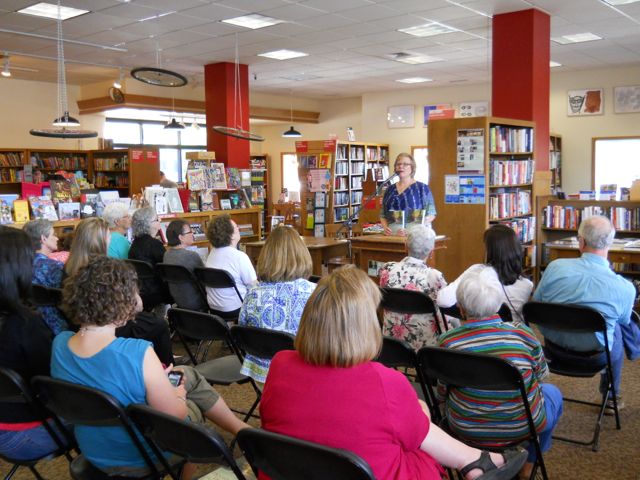 WHY do I write? My mind is filled with stories, characters, issues that need to be discussed, and sometimes a crazy idea or ten. Nature and the uniqueness of the human race and our pets often inspire me.

WHO do I write for? Mostly for women, but sensitive men have enjoyed my novels, too. Women have a unique yet shared perspective and experience. We help each other, we are nurturing, guiding, leading and comforting – as a general rule.

WHAT do you write? I write stories about women, f families and friends and issues they deal with every day. Abuse. Desertion. Sexual awakening. Love. Children. Loss. Forgiveness. Aging. Opportunities. Change.

WHERE do you go to write? My office mostly. They closed my favorite bookstore (Borders West Wichita) where I spent many hours on my first and second novels. Watermark Books & Cafe is another good place to hang out and write. Libraries and coffee shops work, too.

WHEN is your best time to write? Afternoons and evenings. Mornings I usually do chores (laundry, grocery shopping, cleaning, gardening, care giving). Sometimes when I wake up I remember a part of a dream that applies to my current work in progress, or and idea for a character or story, so I quickly jot it down before I forget it.

Her Royal Spyness by Rhys Bowen


If you enjoy British humor and settings you will love this fun story. The heroine is young, smart, 34th removed from the throne and broke. Having had her allowance cut off when she turned 21 she now has to venture out in the world and make a living. But how does one do that when one has had servants all one’s life, you ask? It isn’t an easy task.

With a host of interesting cousins and men vying for her royal hand, Georgiana is determined to find love and a job, not necessarily in that order. What she discovers is a dead body and the distinct impression that someone is trying to kill her, too. You’ll enjoy this fun romp, I certainly did.

Before We Were Yours by Lisa Wingate


O.M.G. This was an amazing story that I had trouble putting down. A sure sign of a good book. This story is about children of the river who are stolen from their parents and forced into the infamous Tennessee Children’s Society Home. A place where children were sold and brutalized for decades. But it isn’t just the story of how they survived, it’s also about the next generations that came along after. About secrets, loss and the bonds of blood. I highly recommend this book.

“It is not the strongest of the species that survive, nor the most intelligent, but the one most responsive to change.” ~Charles Darwin 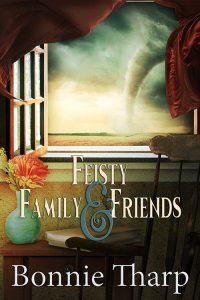 ge of twenty-one, Peggy Malone is the owner of a successful family business, employing her sister, Megan, her father, Tom, and her neighbor, Tillie. Peggy’s Pantry is the hot spot café in Riverside, serving the best pastries, sandwiches, soups and coffee.

Baking in the wee hours for Peggy’s Pantry are taking their toll on Tillie Linden, so her husband, Joe, decides to help. The dynamic duo makes a great pair in the kitchen, creating new and delicious treats for the café patrons, but will this partnership last?

Now a junior at North High School, Megan is drawn to a handsome boy in her history class with bright blue eyes and blond hair. Relationships are hard for the shy brunette, but she feels love stirring. Will he break her heart?

Peggy is worried about her little sister—she seems to be thinking with her heart, and not her brain, and Peggy doesn’t want to see her sister wind up wasting her life because she chose to not go to college.

It feels like all the strings are being pulled on everyone in this little family, and when Kansas weather wreaks havoc in Riverside, their lives are changed in seconds. Will this family be ripped apart as well, or will Mother Nature’s winds only tighten the binds between this patched together family?

Bite Me by Parker Blue
My rating: 4 of 5 stars

Sometimes you need a little fantasy in your life. A wee bit of butt-kicking, a girl with a few drops of demon blood to ramp up her skills. Killing vampires seems to help Val keep the demon under control, but it leads to unforeseen consequences. After being kicked out of the house for supposedly endangering her younger sister Val is bereft, but soon finds solace and a furry partner who is part Terrior and part hellhound, and does a mean job of grabbing for the dangly bits on vampires.

This was great fun to read and no doubt I will read more in the series. Parker Blue makes the dark and seedy side come to life with humor and just the right amount of tension. I thoroughly enjoyed this book!