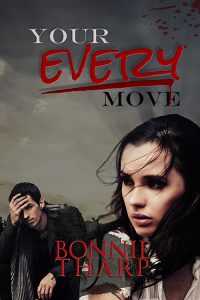 Nothing is working out like she planned.  Amanda Cook doesn’t know who is following her or why. She is just a simple college student planning out her future, working at the neighborhood taco shop and living with her great aunt.  When her best friend’s cousin, Mitch, arrives in town he immediately steals her heart, but someone else wants it more. Her paranoia grows when she spots the same car at odd places around town and starts getting strange letters in the mail.  One night after class, a man tackles Amanda and wrestles her to the ground. As she fights for her life, she has the heartbreaking realization that her stalker could possibly be someone she knows.

Wichita, KS – While the family has always been defined by a husband and wife and their children, today “non-traditional” families have become the norm. If you share in love and responsibility for each other, anyone can be your family.

B.D. Tharp is the author of Feisty Family Values. First published in 2010, the novel tells the story of cousins Regina, and Annabelle, along with their friend Tillie, make up an unlikely and unconventional family, to say the least. Wildly different personalities thrust together by circumstance; together the women confront abuse, illness and an unexpected surprise at their doorstep. Tharp’s compelling voice and rich characters have made the book a favorite among readers.

“When I started the book, I had no concept of who the characters were going to be, but they typically develop from people I know,” explains Tharp. “I had all these puzzle pieces I needed to put together. Annabelle is a composite of my grandmother and other mother figures in my life. I saw Feisty Family Values as an opportunity to explore a character who has a hard time standing up for herself.”

Indeed, the Baby Boomer Generation represents about 28 percent of our total population; thirty-eight million women just like Annabelle, many of them vulnerable to physical, emotional and financial abuse. Tharp’s experience as a reporter for Active Aging magazine inspired her to further examine the subject of elderly abuse, a recurring theme throughout Feisty Family Values.

“That kind of abuse is just not talked about,” says Tharp. “I felt very strongly about addressing this subject and making sure people become aware. I so admire cultures that revered their elderly. If we don’t respect and protect our elders, we can’t learn from them.”

On revisiting her characters, Tharp says, they just weren’t done telling their stories yet.

“I liked the idea of looking at another character in the family and exploring how their lives had changed amidst all the upheaval. It’s a book forgiveness and tolerance. They’re each unique, they all have flaws, but they’re a family.”

Close-Up Talk Radio will feature B.D. Tharp in a four-part interview with Jim Masters on March 8th and March 15th at 4pm and with Doug Llewelyn on March 22nd and March 29th at 7pm EST.

Listen to the show www.blogtalkradio.com/closeuptalkradio. If you have a question for our guest, call (347) 996-3389.

I love bookmarks so much I decided to blog about it today on Author Expressions. I hope you’ll stop by and comment.

Visit Keyhole Conversations to read some of Bonnie’s research secrets on “Feisty Family Values” and some facts that may surprise you. Watch the video of “B.D. “Bonnie” Tharp reading a favorite scene from her novel, “Feisty Family Values” that centers around a three-legged cat. Her book, available as a hardback or e-book, can be found at amazon.com or barnesandnoble.com.”

Thanks Keyhole Conversations! You Rock!!

Hope you’ll stop by and read about Beautiful Beginnings.

Have a great Monday!

For a limited time the Nook AND Kindle editions of FEISTY FAMILY VALUES is on sale for $3.99.  Just click on the Amazon Click to Purchase box on the left side of the page and “enjoy the read.”

WICHITA, KS – USABookNews.com, the premiere online magazine and review website for mainstream and independent publishing houses, announced the winners and finalists of THE “BEST BOOKS 2010” AWARDS (BBA) on October 26, 2010. Over 500 winners and finalists were announced in over 140 categories covering print and audio books. Awards were presented for titles published in 2010 and late 2009.

Jeffrey Keen, President and CEO of USABookNews.com, said of the awards, now in their eighth year, “The 2010 results represent a phenomenal mix of books from a wide array of publishers throughout the United States. With a full publicity and marketing campaign promoting the results of BBA, this year’s winners and finalists will gain additional media coverage for the upcoming holiday retail season.”

A complete list of the winners and finalists of the USABookNews.com National “Best Books 2010” Awards are available at http://www.USABookNews.com in alphabetical order by category.

For those of you who are unable to attend one of my book signings I now have book plate stickers available that I can autograph and send to you “free of charge.”   Why? A dear friend of mine who lives on the east coast purchased a copy of Feisty Family Values and wanted it signed, so he sent it to me and included return postage.  I was flattered and honored, but saddened that he had to pay so much for postage.  I had to find a better way for readers to get a signed copy of Feisty Family Values.

So, I got on the internet and low and behold I found book plates.  Tons of them in fact and it appears they have been a collectors items forever.  The hardest part was finding blank ones big enough for me to put something beyond my name on them.  What I found was http://bookplateink.com.

Contact me at bd@bdtharp.com  if you would like to have a signed bookplate for your copy of Feisty Family Values.

I’m pleased to share that the three items I entered in the KPC Contest all won awards this year.

Kansas Professional Communicators is the only statewide organization of women and men representing the full spectrum of communication professionals.

My publisher Five Star notified me today that the first print run of Feisty Family Values has sold out.  How cool is that?  They are doing another printing and my goal is to sell out so they will go for a third, and so on and so on and so on.

Those of you that have bought your copy of Feisty Family Values – Thank you from the bottom of my heart!  Tell your friends and family, call your local library and ask them to stock a copy, write a review on Amazon.com, Borders.com, or Barnesandnoble.com; and buy them as gifts.

Word of mouth is the best way to spread the word about how much you enjoyed Feisty Family Values. And just so you know, the 2nd draft of the sequel, Patchwork Family is complete. It is out for review by a couple of my writing buddies who happen to be great at proofing.  As soon as it’s polished and ready for prime time I’ll give the publisher a call and see if they’ll acquire it.

Take care and enjoy the roller coaster that is life…